Note from Deborah Riley-Magnus – I LOVE inspirational people – those writers and creative thinkers that set a real fire under our butts. Dan Holloway is just that kind of inspiring. He and Year Zero Writers have set the groundwork for some groundbreaking advances in how creative people see the publishing world! 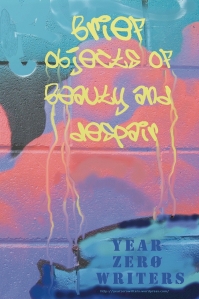 Writers love to moan. We love to say the system’s unfair. We love to say the public has no taste; the publishers don’t understand the public (sliding our argument to suit our end, of course); agents are slowpaced and biased. We love to complain. As though a Monty-Pythonesque character will boom down from the sky “I hear your complaint and I shall make it well” and a contract with six-figure advance will miraculously appear in our hands.

As I trawl through a number of writers’ forums, the sheer energy we expend complaining makes me wonder – why are we really moaning (especially when I hear people berate the industry for expecting time-pressed writers to market their own books!)? Isn’t that energy better spent actually doing something?

I’ve always joked that my motto is “it’s better to fail gloriously than never to have tried”, but it’s not really that much of a joke. What frustrates me most is seeing great writers waiting for something to happen, or frustrated that nothing does. I certainly DON’T believe that hard work creates success. I do believe that those who succeed have worked hard for it, though. I also would like to believe that as writers we’re a fairly creative bunch. It’s what we do, right? So why is it we’re so bad at thinking up ways to make our mark? Why are so many of us slaves to the agent-publisher route? Why do people still insist that getting lost amidst the crowds of Lulu or floundering on blogger and smashwords are the only alternatives?

Why don’t people get out there and DO something, and not give a fig whether they fail? I’m going to start with an answer. I think most people don’t because they’re the people about whom the adage that “everyone has a book in them” was written. There are lots and lots of people who’ve written a book. Maybe even a very good book. And they want to spend the rest of their lives selling it and living off the proceeds. Well, I’m not talking to them. Frankly, whether they look to the mainstream or beyond, they’re never going to make a career as writers. It’s all very well worrying that you’ll throw away your book’s big chance if your experiment goes wrong. But that’s only an argument if you’ve only got one book in you. And if you have, you’re never going to be a career writer.

This is aimed at the rest of you, those who know you’ll have to produce a book a year for the rest of your working lives if you’re going to stand a chance – and back that up with at least ten to a hundred times that number of articles. It’s to those of you for whom a failure with one book isn’t a “waste” but an experience. It’s for those of you who like the sound of my other hackneyed adage: “How do you know if you haven’t tried?”

This year I’ve tried three big things. One of them fell flat on its face and two of them have been the most amazing experiences. This is what I’ve learned.

1. The Man Who Painted Agnieszka’s Shoes. This is a novel I wrote interactively on Facebook, in a group of the same name. The idea was to get readers involved in the story, to draw them in and get them deciding which characters they wanted more of, which they wanted killed off, which story angles they wanted to pursue and so on. I wrote al kinds of background material, promoted it online and in the local press, got a reasonable number (218 at latest) of people in the group, but it never really caught on. I had some lovely comments from my fellow writers, but readers never really caught the interactive bug.

Why? I think there are several reasons. But most of all, I think what I learned, and it’s been borne out elsewhere on the web, is that for all we talk about interweb this and 2.0 that, people behave on the net much as they behave off it – and most people want to be told a story, and not to have to get involved in it. Maybe it would work better in a book that overlapped more with traditional gaming scenarios – certainly MCM had some success with 3D1D. But it doesn’t work for how I write.

Nonetheless, I learned a lot about the craft of writing (serials are great for pacing), and I met some great people. And at least I know it doesn’t work for me.

2. I got the Year Zero Writers (http://yearzerowriters.wordpress.com/) collective together originally as a marketing group. I thought we could use the economy of scale of numbers as a way of cracking the hardest self-publisher’s nut of all – getting word out. It hasn’t quite worked like that, although the word IS getting out. What’s happened is that around 20 of us have formed less of a marketing collective and more of a mini literary movement, each writing fiction that’s unapologetically literary, and delivering it straight to readers both through books, which are available on the freemium model – with ebooks free and paperbacks for sale, and through daily original fiction on our blog.

I’ve learned some amazing things through Year Zero: first, working in a group of people with similar concerns is great for pushing your writing to the next level. Second, marketing is key, but when you’re indie, it often works best when you’re not trying to market but just doing what you love doing. People get the authenticity. Whilst we just had our books, we went largely unnoticed, even though we were “marketing” a lot. Then we got the blog going, and within a few weeks we were Nylon Mag’s site of the day, labeled “cool”. And people were inviting us to guest blog, strangers were e-mailing saying they loved what we were up to. Authenticity and integrity are absolutely essential. Third, I’ve learned a whole load of things about going the indie way. The freedom you get – editorially, over cover art, over marketing, and over what you write next, is exhilarating. It’s something I can’t imagine swapping for a publishing contract. Fourth, I learned persistence. So many self-publishers give up when they’re not an overnight success, but there are no overnight successes – not really. What matters isn’t how you’re doing on day two of your project – it’s how you’re doing on book five.

3. Free-e-day (http://freeeday.wordpress.com/) is something I literally thought up on the bus. A single day on which every independent creative person gives something away for free to form one big celebration, and show the world what indies can do. It seemed utterly overambitious but I dutifully started a Facebook group and told a few people and, today (literally today, December 1st), we have a full-colour free e-programme with 100 contributors, 5 fantastic web workshops, and a live concert with music, reading, art, and dance, and most of all, we have built an actual indie community around what we’re doing. It’s a festival that will grow and communities and collectives and friendships with it.

So here’s the message. I’m an amateur. I knew nothing about social media theory or marketing before this year other than some experience running a flooring showroom. But I thought 2009 seemed like a perfect time for trying things and seeing what happened. So I did. Everything I tried I tried from scratch. There will be lots of people who disagree very strongly with what I’ve done. I’d respectfully suggest that rather than vent their spleen my way, they put that fantastic energy into seeing what they can do. Go on, everyone. In 2010 DO something. Anything. Just get on with it and don’t let anyone tell you no.

Deborah Riley-Magnus is an author and an Author Success Coach. She has a twenty-seven year professional background in marketing, advertising, and public relations as a writer for print, television, and radio. She writes fiction and non-fiction. Since 2010, she had two novels released. In 2013 her nonfiction, Finding Author Success (Second Edition), and Cross Marketing Magic for Authors were released. Her newest book, Write Brain/Left Brain, focuses on bridging the gap between the creative writer and the marketing author. Deborah produces several pieces monthly for various websites and online publications. She writes an author industry blog and teaches online and live workshops as The Author Success Coach. She belongs to several writing and professional organizations. Deborah has lived on both the east and west coast of the United States and has traveled the country widely. She is a native of Pittsburgh, Pennsylvania and recently returned after living in Los Angeles, California for several years. END_OF_DOCUMENT_TOKEN_TO_BE_REPLACED
This entry was posted on Tuesday, December 1st, 2009 at 9:11 am and tagged with Author, Dan Holloway, Guest Blogger, writer, Year Zero Writers and posted in Guest Blogger. You can follow any responses to this entry through the RSS 2.0 feed.
« Promotions: The Difference between “Free” and “Cheap”
Book Trailers Today … Getting the Most for your Money »

8 responses to “Do Something!”